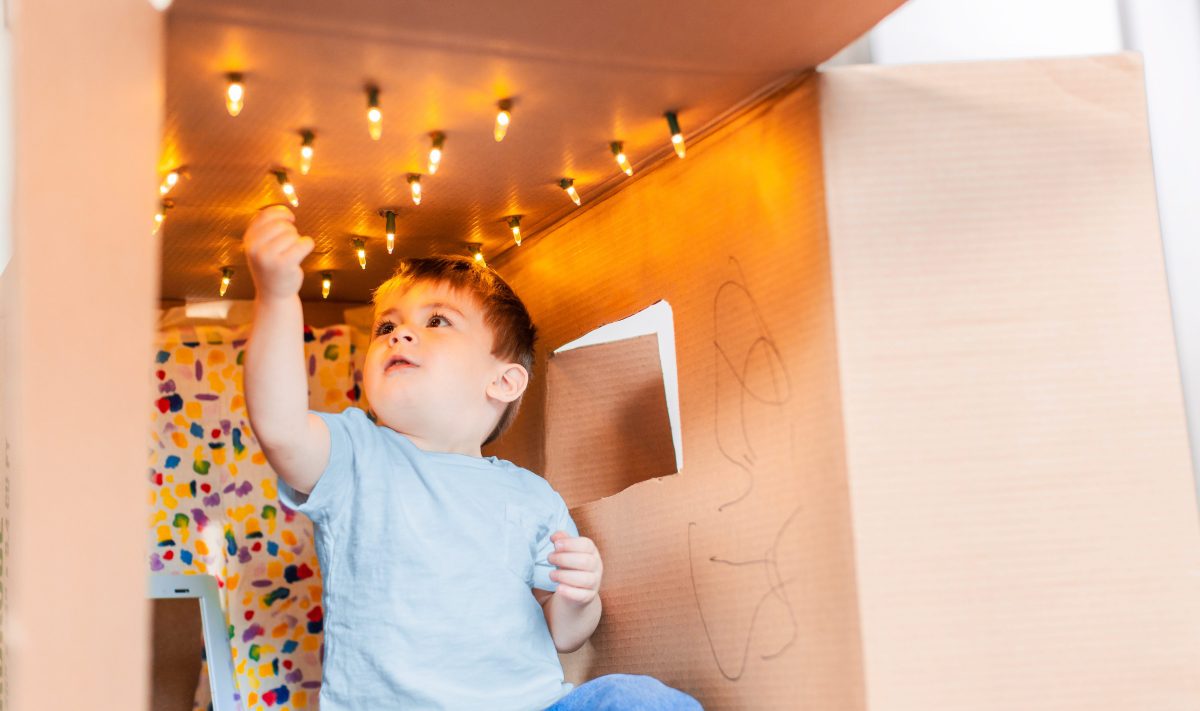 Have you ever seen your toddler put their doll to sleep, walk around in your shoes, stir “soup” in a pot, or bark like a dog? As they approach the 2-year mark, your child is likely starting to play in more creative ways: this is the start of a new era of pretend play.

True imagination play, which involves pretending to be someone or something else, actually happens around age 3 or 4; right now, your toddler’s imagination play is based on their own lived experiences. Your toddler is using their imagination to make sense of the world. The line between reality and fantasy is still blurry, but it’s starting to sharpen with increased real-life experiences and cognitive leaps.

Imagination often comes naturally, so your role doesn’t have to be demanding. Here are some suggestions:

Make a space for pretend play

Consider making a toddler-proofed imagination zone, like a play tent, a large cardboard box, even a corner in a room with toys and props. Your toddler may not always want to stay there, but it can be a great way to encourage pretend play.

Be clear and descriptive

Because your toddler is starting to learn how to use their imagination in their play, you can help by narrating: “we’re in the car now! You better buckle yourself in” or, “we’re having tea! Can you pour me some?”

At this age, your toddler may get frightened when someone roars like a lion because they don’t know yet that the “lion” is just pretending. You can help by reminding them in clear terms: “Louie is still himself. He is just pretending to be a lion, but he’s still a person”. If your toddler tries to actually eat a toy apple, show them a real one and say “we bite real apples, and pretend to eat play apples”, then show them how to pretend.

Pants and shirts are still really tricky for toddlers to put on (though you may have noticed they’re a lot easier to take off 😉), so go for simplicity. Wigs, big shoes, capes, robes, and hats—as well as loose fabric and blankets (avoid scarves, which can get wrapped around their necks)—are all relatively easy to put on and take off. Your toddler may not yet be ready to inhabit the role of an imaginary character, but they are starting to pretend to be the people they know.

They don’t have to be exact replicas, but dolls and other toys that look like real things are particularly fun for pretend play. You can use real-world tools from the kitchen or garden as well.

For your toddler to play for any length of time, you will likely need to be their play partner. If they are pretending to make pancakes, you can say, “can you serve me some of those pancakes on a plate? And pour some syrup on them?”